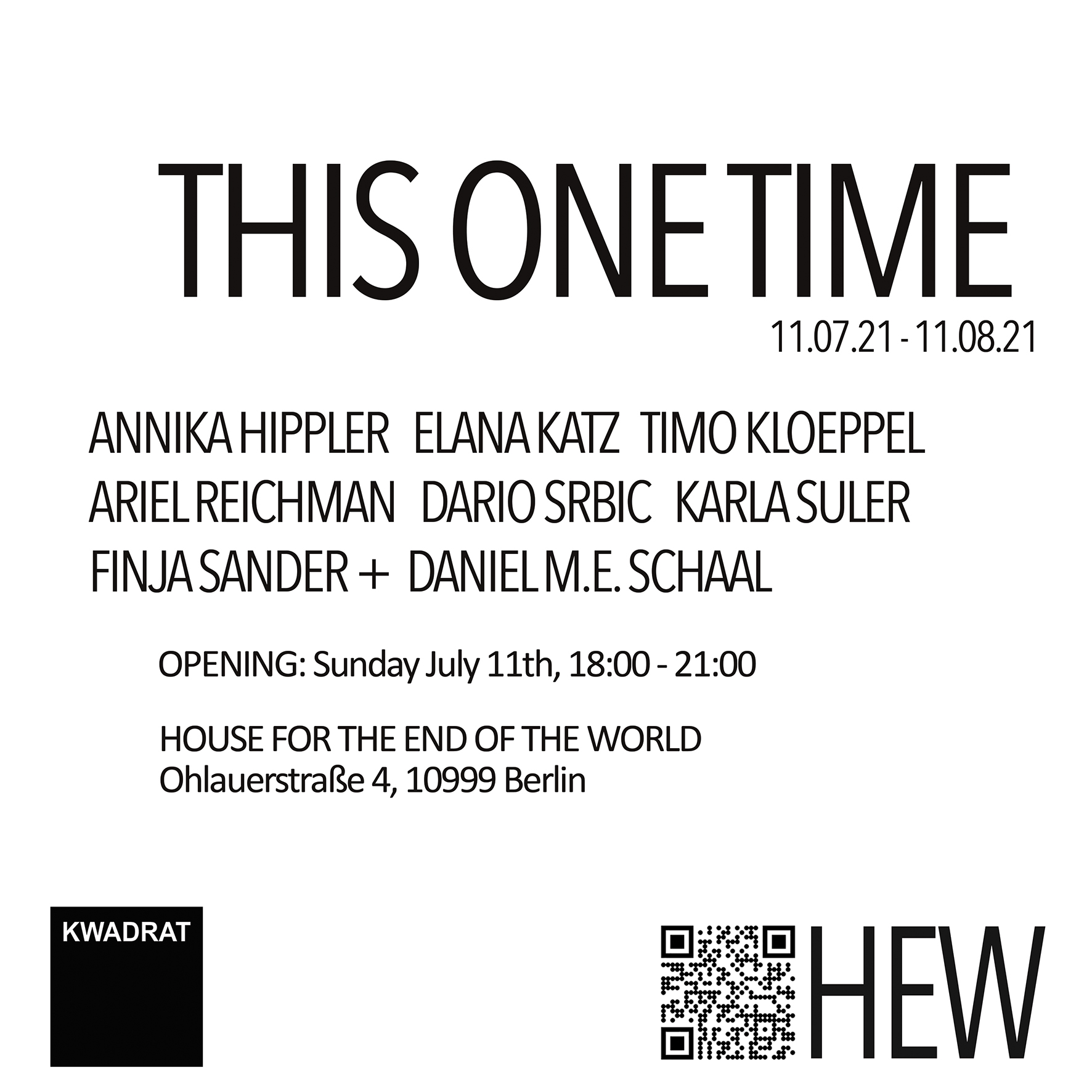 Annika Hippler is a visual artist, born, raised and based in Berlin. She works with laser beams to produce hypnotic spatial and visual compositions by examining the painterly qualities of light frequency and wavelength. Hippler‘s work deals with phenomenas of science and astrophysics, the universal perception of space and the transfer of scientific knowledge into an artistic language of light. She studied at the Berlin University of Arts and at the Braunschweig University of Art with John M Armleder amongst others. Her works have been shown in numerous institutions, galleries and museums, including Kunstverein Hannover, Wilhelm Hack Museum, Kunstmuseum Celle, Zverev Center for Contemporary Art in Moscow and at the Contemporary Istanbul art fair. Received stipends and participated in residencies programs in Germany, Austria, Russia, Czech Republic, India and Tunisia. Her light installation „Orbit" was awarded by the ZKM Karlsruhe with the Art Prize "Woven Light“. Her work is currently on view in a solo show at Kunstverein Ingolstadt. www.annika-hippler.net

Elana Katz is a conceptual artist working primarily in the medium of performance art. Katz’s work confronts cultural conventions, critically examines the complexity that lies within contradictions, and thus aims to provoke experiences of “unlearning” the assumed. Katz is a recipient of the Franklin Furnace Fund for Performance Art grant (2011), and her interational exhibitions/ performances include the Royal Museum of Fine Arts of Belgium (2011), Diehl CUBE, Berlin (2013), P.P.O.W. Gallery, New York (2013), DNA Berlin (2015), ROCKELMANN&, Berlin (2016 -19), IEEB 7th of Bucharest (2017), Gallery KWADRAT, Berlin (2017-20), DFBRL8R Performance Art Gallery, Chicago (2019), and the Museum of Sundsvall, Sweden (2019-20), where her work has been recently acquired into the museum’s permanent collection. In 2020, in cooperation with Gallery KWADRAT, she founded the Berlin contemporary art space House for the End of the World (HEW), where she curates a program focused on site-specificity. Katz has been based in Berlin since 2008. www.elanakatz.eu

Timo Klöppel, born in Berlin in 1981, builds architectural situations that are topoanalytical discussions, studies on the connection between space and soul. His installations question the constructedness of our perception, reverse the usual order of things and disorient us in order to throw us back on our imagination. Its rooms bring gravel into the bedroom, the sea into the kitchen. The non-lockable invades the lockable and vice versa. Everything is in a demonstrated, constant rearrangement. The buildings often move on during the exhibition, change, are taken apart and reconstructed again. The changeability of his work is its real focus, the exhibited work rather as an ephemeral state of an ongoing idea that continues to think. Klöppel uses his installations as concrete opportunities for knowledge and habitable threshold locations between one's own internal states and the external states of the world. www.kwadrat-berlin.com/artists/timokloeppel

Ariel Reichman (b. 1979, Johannesburg, South Africa) “The world vibrates in Ariel Reichman’s works. Objects transform into confusing or dismaying feelings. Danger and fascination; desiring and force lie side by side together. But Ariel does not illustrate the surface of a conflict; he proffers no report over it. His work is about human vulnerability as well as of the moment at which the senses of things overwhelm people. In Japanese aesthetics, the term mono-no-aware was shaped: the pathos of things, empathy with them, and the consciousness of their momentariness”. Quote by Hito Steyerl. Reichman has exhibited in KW Institute for Contemporary Art Berlin, Kunstverein In Hamburg, Frieze NY, PSM Berlin, Goodman gallery, Cape Town,Tel Aviv Museum of art, Sommer gallery,Tel Aviv among others. He has a current ongoing outdoor installation at Kunstverein Arnsberg . Upcoming exhibitions include an installation at Bad Gastein in Austria, as well as “MINDBOMS” at Kunsthalle Mannheim. www.arielreichman.com

[acta]ODEM is an artistic alliance between Berlin-based artists Finja Sander + Daniel M.E. Schaal. Since 4 years now Sander has established herself as an perfomance artist and has allready showen her work in institutions and galleries like Galerie Burster, C/O Berlin, Museum für Fotografie, Grimm Museum and Hambuger Bahnhof. During the performative acts, Sander understands her own body as material, as an object that reshapes existing structures and images, adds new perspectives and intervenes in found situations. To date, over 27 performative works have been created, which are shown in the form of live performances, short interventions, as well as in photographic / film documentations. Daniel M.E. Schaal tells diverse narratives within different materials and techniques, focused on products and biproducts that are involved into several consumption/industrial processes. He thinks and acts in layers and transcends their rolls and functions. Daniel has exhibited in Germany, France, Denmark and Austria. Institutions and galleries: Torstraße111 (2017), Bar Barbette (2018), uy.studio (2019), Galerie Burster, Galerie Martin Mertens, HB55 (2020), Galerie Friese (2021), Galerie Mathias Mayr (2021) and is represented in several collections (Sascha Dornhöfer, Niklas Bolle). Assuming the differences Sander and Schaal work on a divers narrative that brings together several artistic disciplines and questions the fundamental structures that define the human being and what it is surrounded by. They have allready showen and worked with galleries and institutions like Galerie Burster, PS120 and 48hNeukölln. www.acta-odem.art

Dario Srbić, born in the former Yugoslavia, lives in Berlin, Germany and London, UK. Dario started coding as a twelve-year-old and always felt that the machine was not merely executing the code, but also emanating an inexplicable sensuousness. Initially fascinated by the dark arts of algorithmic trading in the business world(s) he transitioned through philosophy into the equally dark sciences of algorithmic art. His current practice examines the embodiment of desire (arousal, pain, excitement) into code and expresses it in artificially (ready)made sculpture and performance. Dario holds an MA in Photography from Central Saint Martins and is currently studying for a practice-led PhD at Royal College of Art supervised by Professor Johnny Golding and Graham Hudson. Dario’s work has been exhibited in Science Museum - London in 2019, Angewandte Innovation Lab - Vienna in 2019, Austrian Cultural Forum - Berlin in 2019, The Victoria & Albert Museum's Digital Futures - London in 2018, Assembly Point and Asylum - London in 2018, MAK Museum - Vienna in 2017, and Seen Fifteen Gallery - London in 2016 amongst others. Dario’s work has been published in numerous publications, his MA thesis published in Journal of Philosophy of Photography, and his video work is held in Ursula Blickle Videoarchive. www.dariosrbic.com

Karla Suler is interested in intangible and notional nature of an object or an action; a work that absorbs itself in invisible background process or a series of actions/interventions that might be or might not be accessible to a casual by passer but nevertheless affect or disrupt the continuity of the space even if not experienced or seen. Reflecting on the incidental and repetitive arrangement of such action itself, and a futility of such process that may or may never have its spectator, alternatively finalising itself in the utopian idea of artwork that may never reach its physical existence. Karla holds M.A in Fine Art Education from Academy of Fine Arts in Zagreb. Her works have been exhibited in HDLU Zagreb/, Rijeka, Broadwalk Arts Bristol, Gallery at Willesden Green London, Gallery 10m2/Pierre Curtin Zagreb, o3one Belgrade, Centre for Substructured Loss / Stillpoint Spaces Berlin, among others. Her works have been included in Erste&Steiermärkische Bank and Hypo Alpe Adria Bank collections.

ABOUT:
HEW is a project space by artist and curator Elana Katz in cooperation with Gallery KWADRAT, founded in Berlin in March 2020. HEW’s activities are reactionary creative and critical experimentation, including site-specific installations, actions, and discourse — both in the context of public events and the intimacy of studio work. Launched at the beginning of Berlin’s COVID-19 lock-down, in the context of the current pandemic HEW functions as a dystopian sanctuary created by artists in surreal and uncertain times.